Glasses are not new to everyone, of course, there are many kinds of glasses, such as myopia glasses, glasses without degrees, sunglasses, etc. of course, each kind of glasses has different purposes, but there is one thing in common, that is, after wearing glasses, not only will not affect the line of sight, but will make the line of sight clearer, and the lenses of glasses are made of transparent materials, which is easy to be stained with dust, so people will use all kinds of methods to wipe the glasses, to ensure the cleanness and hygiene of the glasses, and the transparency can be higher. When you buy glasses, you will wear glasses cloth, and many people will directly use glasses cloth to wipe the glasses. In fact, this way is wrong. 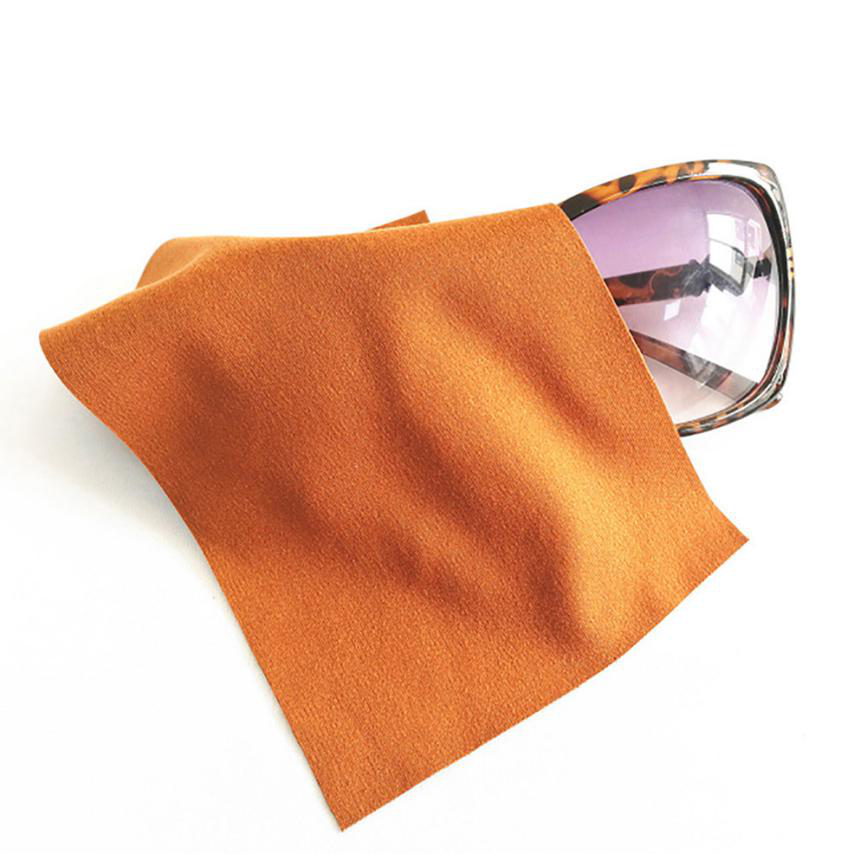 The first mistake is to find something to wipe your glasses. Because people need to wear glasses frequently in life, and some people may find a handkerchief or a clean cloth to wipe your glasses when they see that they are dirty. In fact, the surface of these cloths is rough, but the naked eye can't see them. Wiping your glasses with a cloth will repeatedly rub the lenses, resulting in lens changes The more you rub it, the more blurry it gets. 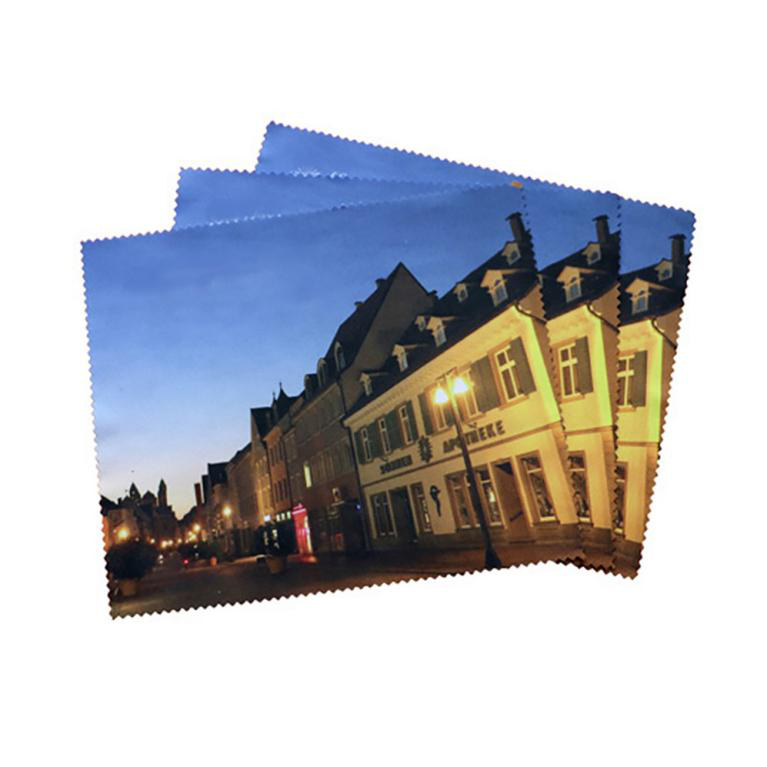 The second big mistake is to hold the lens by hand. Many people think that their hands are clean, so they wipe the glasses with the lens by hand. In fact, there will be sweat or grease on their hands. It is very difficult to wipe off the sweat or grease on the glasses, so do not touch the lens when holding the glasses. The third big mistake is that clothes wipe glasses. Many people's habit is to wipe the glasses directly because people think that their clothes are relatively soft and will not damage glasses. In fact, clothes are soft for people themselves, but for glasses, clothes are very rough and easy to damage lenses.

Microfiber is a selling point, so you'll see it prominently written on the packaging of any cloths made this way. However, as I explain in more detail below, there are huge variations in the size of the fibers used in clothes that claim to be "microfiber"—and that makes a big difference to how hygienically they clean. These cloths claim to have fibers 100 times smaller than a human hair, which isn't particularly informative because human hairs vary enormously in size. Fibers that big would probably put these clothes into the "average" category. 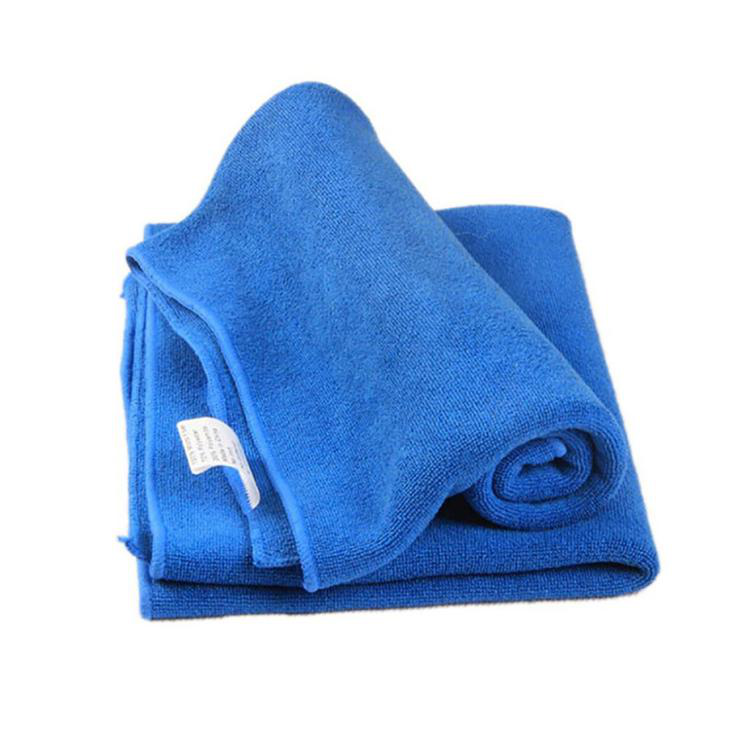 Water is pretty good at cleaning most things all by itself. That's because its molecules have two very different ends. They're electrically unbalanced, so they stick to all kinds of things (including lumps of dirt) like tiny magnets and break them apart. Water is sometimes called a universal solvent because it can dissolve so many different things. Where water alone can't help, you can turn to a detergent (a soapy chemical that clings to dirt and grease, breaks it apart, and makes it easier for water molecules to flush it away). Many people don't like using detergents, however. They're expensive, for one thing. Another problem is that they can cause allergic reactions and skin complaints. Some people worry that overusing detergents and cleaning agents—in an effort to make our homes cleaner and more hygienic—is undermining the way our bodies' immune systems naturally defend themselves against germs. Another complaint is that detergents don't simply disappear into thin air. They contain chemicals that flush down our drains into rivers and seas, where they gradually build up and cause water pollution. We might be making our homes cleaner, but we're making the environment dirtier in the process. For all these reasons (and a few more), many people would love to be able to clean their homes without chemicals—and that's where microfiber cleaning cloths can help.

What's different about a microfiber cloth?

The microfibers in this cloth are too small to see. It looks just like a normal towel, but it works in a totally different way. 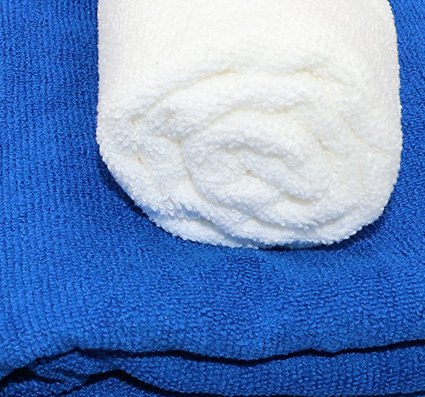 Suppose you want to clean a large, dirty wall as quickly and thoroughly as you can. You could use a toothbrush, but it would take you forever. So probably you'd opt to use the biggest brush with the most bristles you can find. Now scale the problem down. If you want to clean a worktop really well, what's the best thing to use? You can't use a gigantic brush or even a huge cloth, but you can achieve the same effect by using a cloth that packs more punch into the same cleaning area. An ordinary cleaning cloth has fibers made of cotton or a synthetic material such as nylon. You've seen pieces of cotton so you know exactly how big the fibers are. But a microfiber cloth has far more fibers and they're much smaller. If "many hands make light work", so do many fingers—or many micro-fibers.

Why does microfiber clean better? 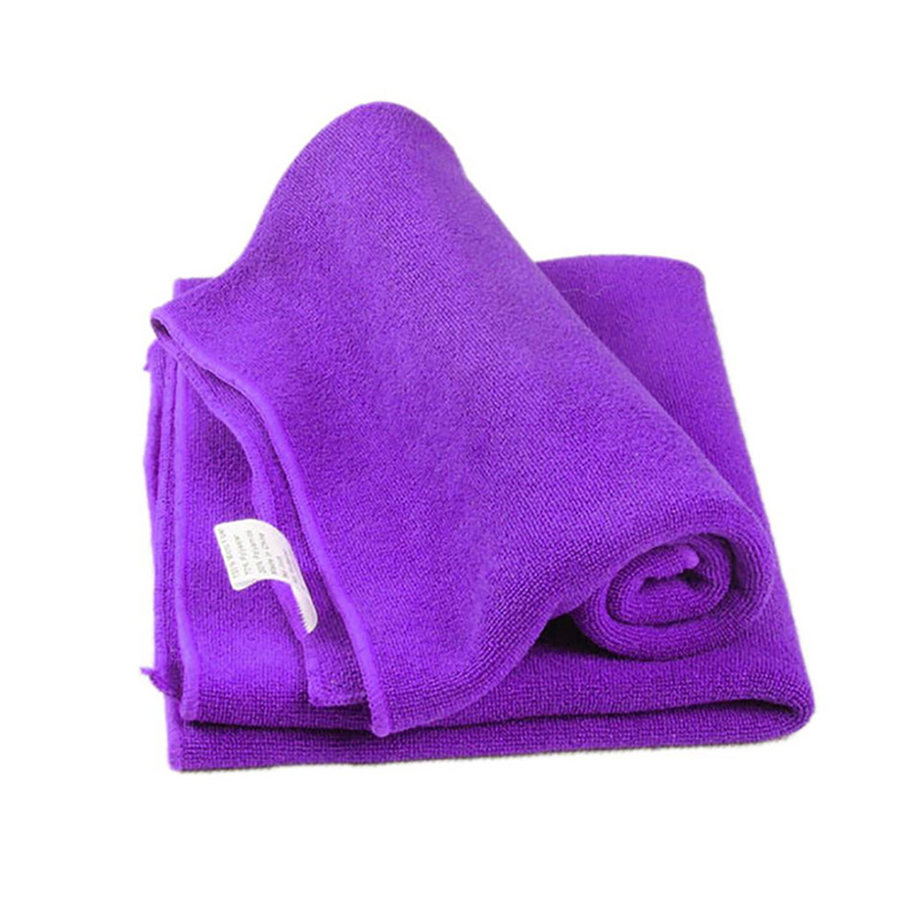 Microfibers are able to attach themselves to even the smallest, most microscopic dirt particles—ones that normal cloth fibers (positively giant in comparison) crudely brush past. If forces were visible, you'd be able to see that there are adhesive forces (the forces of attraction) between microfibers and dirt. As you may have learned in school chemistry, these forces are called van der Waals forces after their discoverer, Nobel-prize winning Dutch chemist Johannes Diderik van der Waals (1837–1923). (Van der Waals forces explain why geckos can stick themselves to ceilings using zillions of tiny hairs on their toes.) Although there is only a microscopic amount of van der Waals force between one microfiber and any given dirt particle, remember that there are millions of microfibers in a cloth, so the overall sticking effect is magnified dramatically. That's why dirt, dust, and other stuff can be "hoovered up" by microfiber cloths. And it's also why you have to clean microfiber cloths so very thoroughly after you've used them. (Generally, it's best to boil a microfiber cloth in a saucepan and avoid washing it with normal detergents. Follow the manufacturer's instructions if you're unsure what to do.)

Providing you keep them clean, good quality microfiber cloths will keep on cleaning hygienically. One recent study of using cloths like this to reduce rates of hospital infection found that "re-usable cloth performance improved at 75 washes, and reduced after 150 washes, although, in most instances, performance after 150 washes was better than at first wash."

How are microfiber cloths made?

Look on the packet that your cloth comes in and you'll probably find it says the ingredients are 50 percent polyester and 50 percent polyamide (another name for nylon). In other words, you have a mixture of two plastics. The cloth is made by forcing the plastics through a tiny pipe and heating them so they weave together. These fused fibers are then split apart into microfibers 10–20 times smaller. 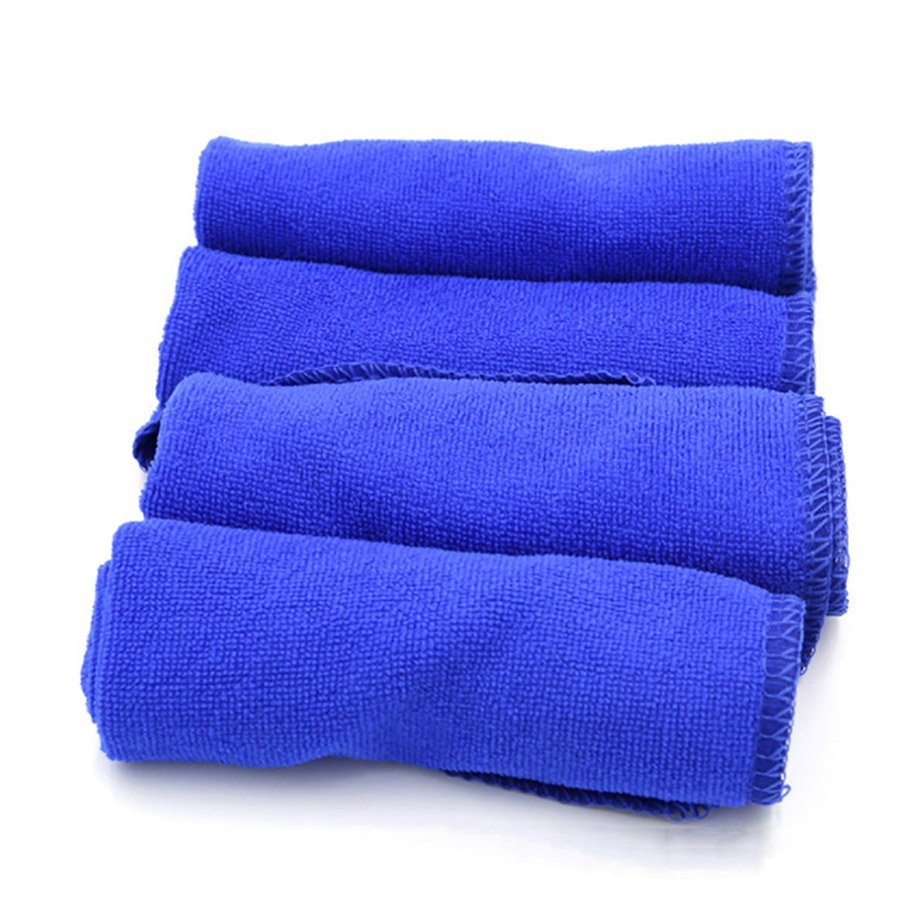 Cloths describe as "microfiber" can vary widely in the size of the fibers they use and therefore in their cleaning effectiveness. In average cloths, the fibers are 10–50 times thinner than a human hair—so each one is only about 3–5 micrometers (three to five microns) in diameter and about 50 times lighter than the fiber in a pair of stockings (0.3 deniers compared to typical 15-denier nylon). That's smaller than pollen grains (5–10 microns) or red blood cells (10–30 microns), roughly the same size as "typical" bacteria (1–5 microns is a good rule of thumb), but still bigger than most viruses (which tend to be smaller than 0.5 microns). Since microfibers can't effectively remove anything smaller than they are, it would be accurate to describe average microfiber cloths as "antibacterial" or "antimicrobial," but "antiviral" would be a more dubious claim. The best clothes can make this claim, however: Norwex and e-cloth, for example, boast that the fibers on their clothes are 1/200 the width of a human hair (around 0.33 microns), which would make them effective for removing over 99 percent of bacteria and at least some viruses, although not 100 percent of them. (One important side-note: microfiber cloths are still very definitely an example of microtechnology, not nanotechnology, because micron-sized fibers are 1000 nanometers wide.) A number of recent studies have found benefits of using microfiber cloths (often combined with steam cleaning) to help minimize the spread of infections in hospitals and similar environments 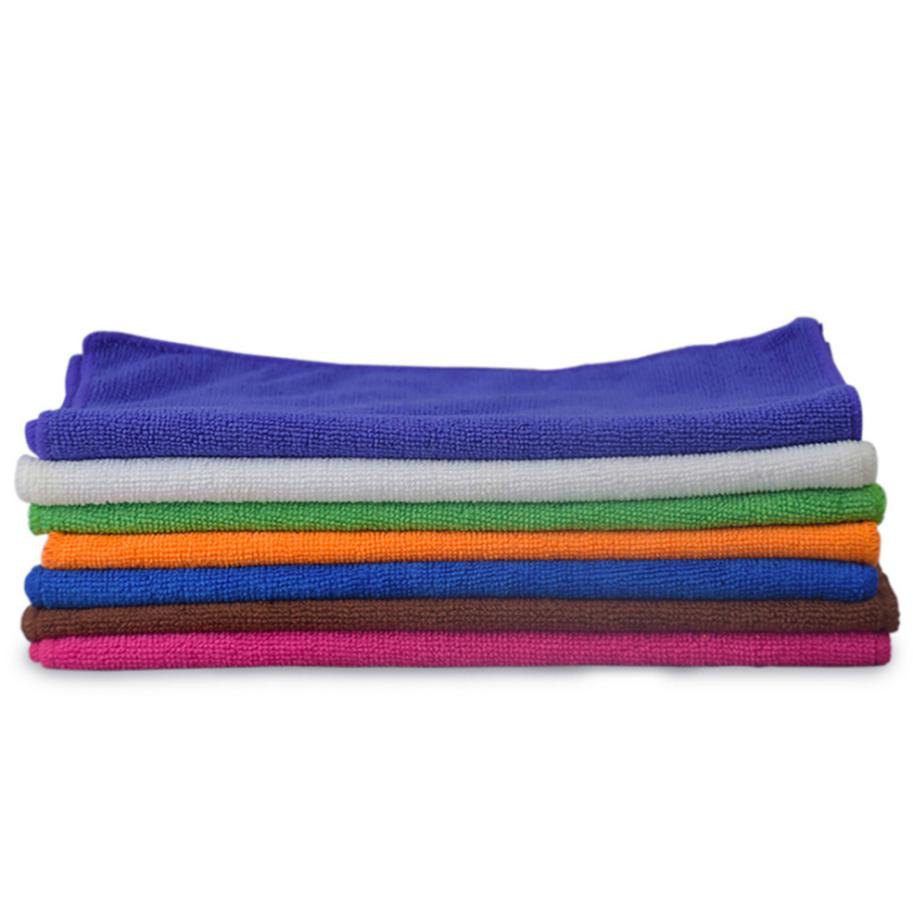 If microfiber cloths are so good, why aren't they more popular?

Microfiber cloths are much more widely known and used in Europe than in the United States, partly because that's where the market-leading brands originated (E-Cloth in the UK; Norwex in Norway). The household chemicals market is worth tens of billions of dollars to big chemical companies and the stores that sell them; they have little or no incentive to get behind a simple technology that undermines their costly products. Companies like this have spent a fortune on advertising for several decades, happily convincing most of us that we need to blast our homes with industrial-strength cleaners in a never-ending war on germs. Is it any wonder, then, that we're skeptical of "magic" microfiber cloths that promise to get our homes hygienically clean with nothing but water?

If you're still doubtful, try one of these clothes for yourself. And remember that what's cleaning your home isn't magic—it's science! 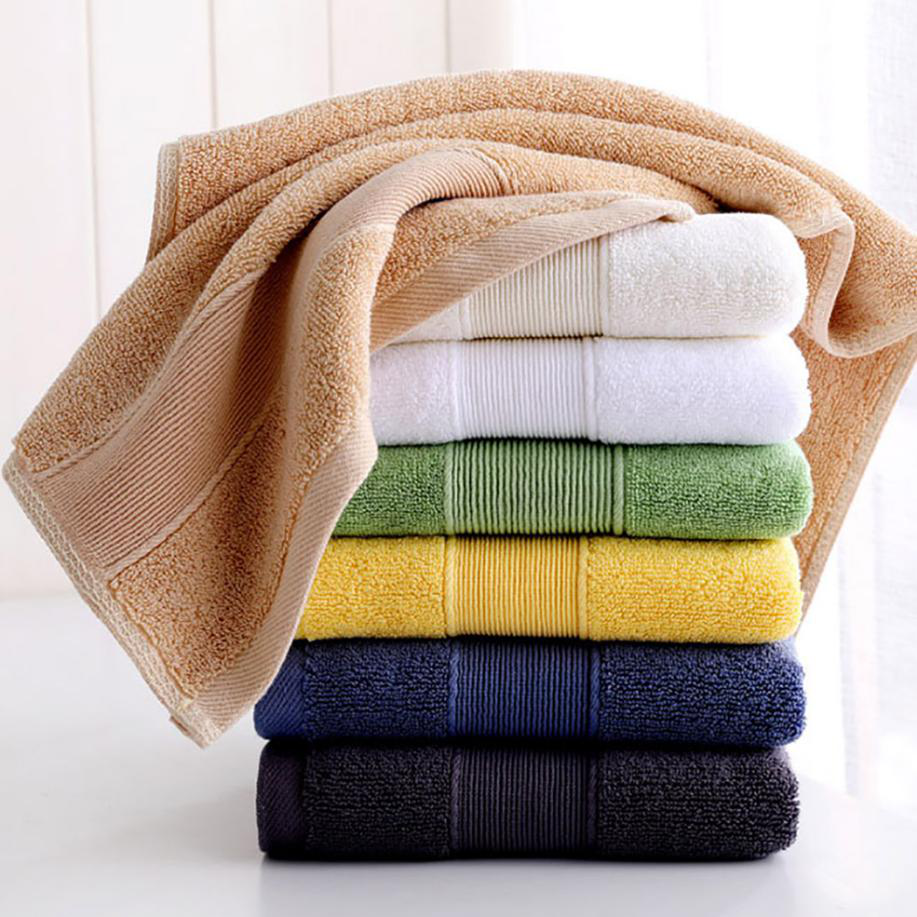 What's the best way to use microfiber cloths?

Like a traditional cleaning cloth, you use them dry for dusting and very slightly wet for more general cleaning, but you'll need to experiment! The first time you use one, the force of habit will probably make you soak it with water and add loads of soap as well—both of which will reduce the cloth's effectiveness. I find the best way to use these cloths is with as little water as possible. If you're cleaning very dirty windows, for example, use a standard cloth and soapy water to wash all the dirt off first. Then rinse them thoroughly with clean water and use a rubber squeegee to get them almost dry, and let them dry in the air for just a little longer. At this point, with hardly any water remaining on the glass, polish over with your microfiber cloth—and you'll be amazed at the smear-free, sparkling finish. If your windows aren't too dirty to start with, simply use the microfiber cloth by itself with a little water. You can use microfiber cloths to clean virtually any hard surface. Try them on your bathroom or kitchen surfaces and you'll be amazed at the results. (Sorry to sound like a bad TV advertisement, but these things really are good!) You'll literally hear things getting squeaky clean and shiny.

Hello, please leave your name and email here before chat online so that we won't miss your message and contact you smoothly.